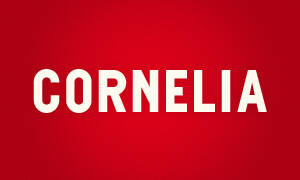 Cornelia comes as an one style display uppercase font. Cornelia is perfect for designing logo's, headings or display typography.

Cornelia, 'an undesigned typeface' was originally made for Wannee, a traditional Dutch cookbook, where we used it for headings and promotional designs made in 2010.

See Cornelia in use.

Designed in Amsterdam - The Netherlands 2010.